Mercedes has planned to bring a new safety car, 2011 Mercedes C63 AMG in the upcoming 2011 German touring car championship starting in May. 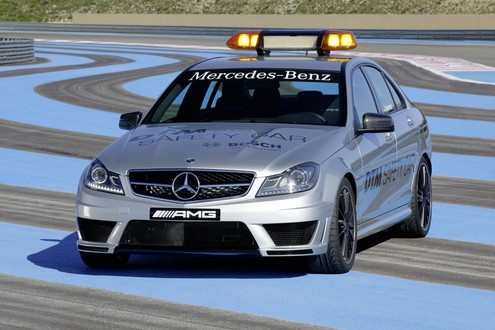 What we think that the C63 AMG doesn’t need any customization and modification for being a safety car as it is in itself a complete car that is powered by 6.3-L V8 engine capable of generating 487 HP and also contains an AMG performance pack including high performance brakes, optimized ESP system and up-rated chassis and suspension. In addition to these, the vehicle also features a SpeedShift MCT 7-speed transmission along with four driving modes plus a Race Start launch control system.

Some of the important features of the C63 AMG DTM Safety Car include distinctive DTM Safety Car logos, the LED light bar on the roof, the stroboscopic flashing LED lights at the front and rear. Besides these, the Safety Car also gets a number plate illuminated with LEDs and the words ‘Safety Car’ on the boot lid so as to keep visibility of the car intact even in extreme weathers. A Radio system and a TV monitor are also introduced in the interior so as to facilitate communication with Race Control. The Safety Car also includes AMG sports bucket seats with four-point seat belts.

It was in 2000 when Mercedes for the first time provided DTM with Safety Car and since then Mercedes has been delivering Safety Cars to DTM.